A few months back I did a favour for a pal who owns a curiosity shop. As a thank you, he highlighted an item in stock that I might like, and that I could have as payment for the favour. The item was a silver teapot. Anyone who knows me will realise that there would have to be more to the item than silveriness and teapottery to rouse my interest, and so it was. Embossed on the bottom of the teapot were the words, ‘Oriental Café, Nottingham, June 1922’.

The Oriental Café stood on Wheeler Gate, on the spot know occupied by the architecturally mundane Pearl Assurance House (formerly the home of Virgin, HMV, then Zavvi and now Poundland). The café was famously old school, and at one time incorporated a gentleman’s coffee and smoking room. It stood until around 1958 when it was demolished. One of the grand features of the café was an elaborate plaster ceiling that was purchased as salvage after the demolition, and may still adorn some lavish mansion. On the Picture the Past website I found an image of the exterior taken in 1944 by W Spencer. You can see Burton’s on the far right of the picture which will probably help you place the scene, as that shop still stands on the corner of Friar Lane.

The decade of the teapot’s creation – the 1920s – was an interesting period in Britain. The country as a whole was slowly recovering from the brutality of global warfare for the first time, and a harsh economic decline was tightening its grip upon the population. By the middle of the decade, unemployment in northern England and Wales was as high as 70%. During the war, women had taken jobs in munitions factories, which provided a wage and a model of a successful life independent of men. Women over 30 voted in a general election for only the second time in 1922, and in 1928 some equality was granted when women were permitted to vote at he age of 21 – the same age as men.

As well as the broader economic and sociological changes affecting Britain, Nottingham started to transform into the city we now know. The demolition of the old Exchange Building and construction of the grand Council House is a good indicator of the physical changes that were undertaken that would make it more recognisable to a time-traveller from contemporary times than previous eras.

My new, old teapot was terribly tarnished but a quick search online revealed I could get a cheap polishing cloth and buff it up. This I did, and was pleased with the outcome. The silver had completely come away in certain places, so no amount of polishing would help. I did what I could, though. As I polished I wondered how many maids and café customers had handled or polished the pot, too, in the intervening 93 years. I don’t know how it survived the tempestuous times that have occurred since 1922, or where it hid, but I’m very glad it did. 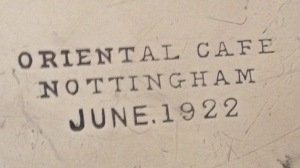 One thought on “The silver teapot from the dawn of modernity”