Sneinton’s old wholsesale market is a curious collection of buildings dating from the late 1930s. In days gone by, retailers in the city visited Sneinton to stock-up on fruit and veg, fish, eggs, flowers and sundries to sell in their stores. The market moved to an area just off Meadow Lane, and the original site has been deserted (and rather ramshackle) for years. However, it has now been renovated by the council, and has units up for rent.

The main streets of the wholesale market are named Avenues A, B, C, D and E. Comparing an Edwardian map of the area (courtesy of Insight Mapping) with the modern site, I was quite saddened to see that the streets demolished to make way for the wholesale market had much more interesting names; Pipe Street, Lucknow Street, Brougham Street, Sheridan Street and Finch Street all made way for the market buildings in (or perhaps just before) 1938. The Avenues don’t match the location of these residential streets exactly, but are pretty close. It’s interesting to see that the Fox & Grapes public house (nicknamed Pretty Windows, and later renamed Peggers) was built on the site of an earlier pub that dates from at least the late 1800s. The name of the Pretty Windows Day Nursery that is based on Avenue A is a reference to the tavern, though the striking panes are no longer visible on the deserted pub building. 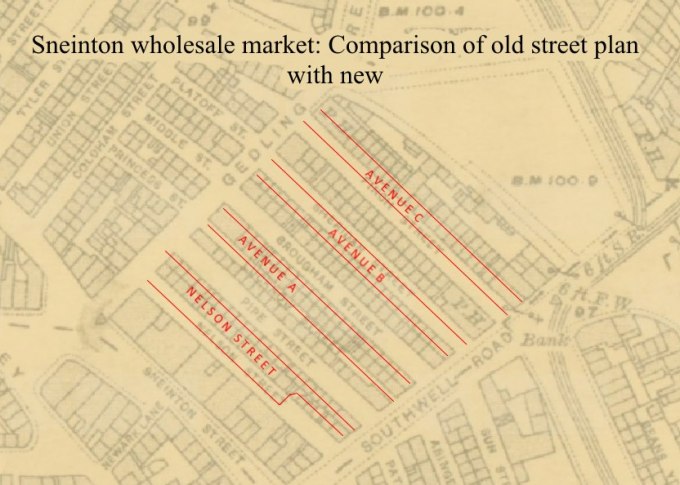 Freckingham Street (shown in the Google image at the top of the post) is named after the Alderman who opened the wholesale market in 1938, and I wonder if Pipe, Lucknow, Brougham, Sheridan and Finch were similar figures from an earlier time. It’s sad when a street’s lost and replaced with something as impersonal as Avenue A. Although we mightn’t know (or care) why a street is named Lucknow Street (for example), there’s no denying it is more characterful than simply being assigned a  letter.

Those lost streets were demolished as part of the city’s bid to clear the slum housing and modernise the city. People nowadays often mourn the disappearance of such neighbourhoods, but in truth we couldn’t keep them. They were structurally unsound, unhygenic and degrading to live in. I think what people really mean when they say they wish those buildings remained is just that they’d be curious to see them, or would like to travel back in time to see them. Photographs will have to suffice nowadays, and we’re lucky that in Nottingham we have Picture The Past to consult on such matters. If you click here you’ll see a picture of long-forgotten Pipe Street, Sneinton courtesy of Picture The Past.